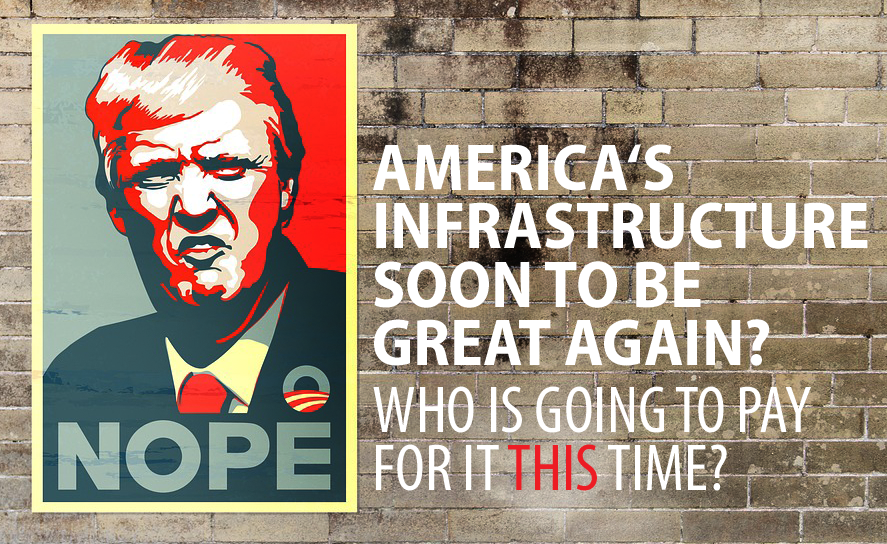 Who is going to pay for it THIS time?

Despite the vehement discrepancies during and after the American presidential elections, the nation seems to agree unanimously on the fact that America’s ageing infrastructure requires significant upgrade.

If one consider America’s current national debt of around $20 trillion, then the question arises how to finance the proposed $1 trillion infrastructure improvement. Trump therefore wants the private sector to play a bigger role when it comes to financing, constructing and operating America’s infrastructure by means of public-private partnerships and tax reliefs.

The Trump administration recently published an unofficial priority list which contains 50 Emergency & National Security projects. The projects’ total investment volume amounts to $137.5 billion whereof 50% is expected to be financed by the private sector. According to different sources, Trump’s priority list was developed by CG/LA Infrastructure, a Washington-based consultancy.

Time will tell how Trump, a real estate mogul and a strong supporter of privatisation,  is capable of implementing his proposed improvement of America’s infrastructure. Given the fierce competition for infrastructure assets at the moment, investors will definitely keep an eye on America’s upcoming infrastructure pipeline.