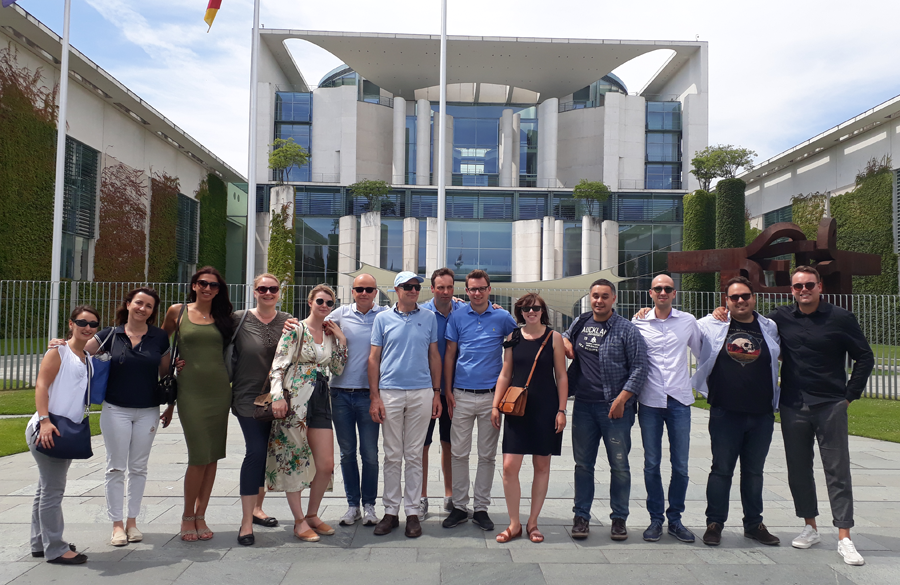 Our yearly two-day summer event took place in Berlin, where of course, one of our offices is based. We started with a kick-off meeting in which new team members were introduced to the rest of the team and colleagues and partners introduced themselves and their fields of expertise. We gathered almost the whole of the team – 15 out of 19 members could join – with team members from Essen, Berlin, Munich, Belgium and Spain meeting up, spending some serious bonding time together. Lots of walking, talking and laughing made sure that all muscle groups were used.

At the kick-off meeting on the first day, our Partner Mercedes Martin from Madrid talked about new infrastructure opportunities in the LATAM markets for TA Europe and the potential to expand our business on the South-American continent. It was very interesting to hear about the pipeline in South America, the complexities and investment volumes – which Mercedes Martin, an expert in the Spanish speaking markets, explained in detail – as well as ways TA Europe can be involved in the future. Fotis Dimitroulas, our Senior Project Manager from Munich updated the team on one of our projects in Munich and Marijke Brijnaert, infrastructure consultant from Belgium talked about the pipeline in Benelux and how TA Europe has positioned itself in that market.

After a very inspiring and productive session in the boardroom, we moved on to cocktails in the rooftop bar of our hotel, which overlooked the ‘Gedächtniskirche’ memorial church in Berlin, a central landmark at the Kurfürstendamm in Berlin and moved on to a very nice dinner in a restaurant right by the Spree, where we had lovely food and conversation.

Culture was the focus of the next day and after a revitalising breakfast, we set off to enjoy a sight-seeing boat trip on the Spree, admiring old and new architecture, for example, the German Parliament, the Federal Chancellery (nicknamed ‘Merkel’s washing machine’ by Berliners) and the House of World Cultures – known as the ‘pregnant oyster’. We also visited the German Parliament, which provides visitors with a fantastic view from the glass dome over the whole of Berlin.

The team concluded that the event was productive and fun – a fantastic opportunity for everyone from the five different company locations – Essen, Berlin, Brussels, Munich and Madrid – to come together and exchange ideas.